Hello, Lovely Tatters!  Wow, two months since my last blog post!  I'm back to my couch potato mode, I suppose.

I've not done a lot to brag about in the last few weeks.  I've tatted a bunch of  button ornaments, redesigned one of my ice drops to work on a button, ordered a ton of stuff I am anxiously waiting for that seems to be forever coming.

Christmas has come and gone, New Year is now another memory.  We didn't decorate at all inside the house, but the front lawn looked like Las Vegas at night!  Between us and the neighbours, I'm sure we kept the electric company hopping!   Beloved has decided that he wants to add a new display each year.  I wonder if he realizes that we have a finite amount of space to add an infinite number of his display ideas?  I shouldn't complain, it keeps him busy!

I wonder if any of you have had time to look at the tatting groups on Facebook, particularly Diane Cademartori's newest  brainchild,"Tatted Button Ornaments".  These are FUN!!  I thought ice drops were addictive, but I've found myself exploring buttons online in antique sites, Etsy pages, Ebay sites, local stores, online vendors, it's weird!  I may be looking at buttons when I head to the Big City next week when I'm there for another appointment (oh, yay! NOT!!).

Have you considered what you would do to update a motif or existing pattern to work in another application?  It's really not that hard!  It just takes a little "out of the box" thinking. 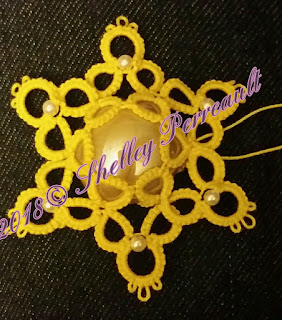 This is my "Suzan Sunshine" Ice Drop, designed for the FaceBook group "Ice Drop Addicts" in 2018.  The pattern is in the files section of that group, if you're at all interested in giving it a whirl.
I've been a busy girl, and I've added to it, as you can see here: 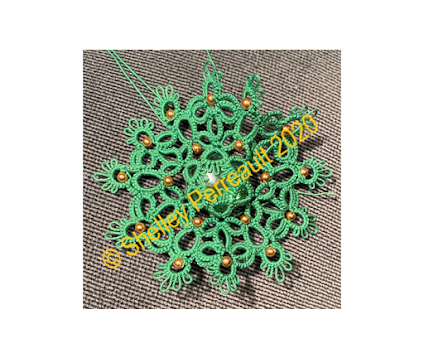 I decided I wasn't happy with the original pattern because it just looked "unfinished" somehow, although I've had many people express sincere pleasure in how it looks and how easy Suzan is to make.  There are two rounds to the update, but it looks like much more and I have to admit, I do like the update! 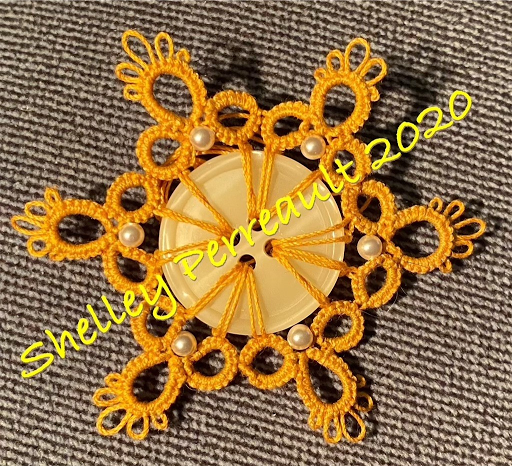 I told you I was busy over the holidays!  I decided Suzan would lend herself well to a button, and it did!  I was really very pleased with how easy it was to do this!

To further illustrate how easy it was to adapt this to a button, here is the as-yet-unnamed adaptation I made to the Ice Drop, again to fit a button: 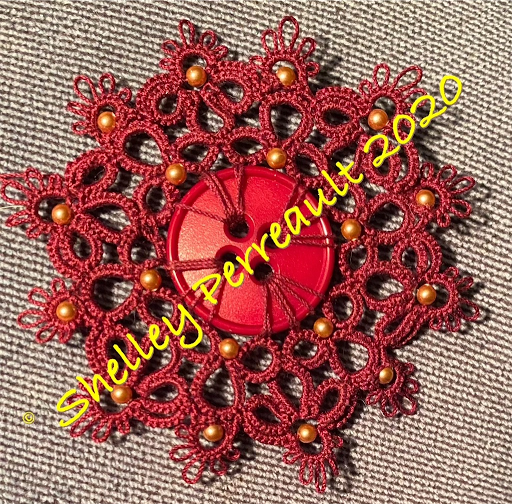 This has been a really interesting journey!  Here's another, but this one was never made as an Ice Drop: 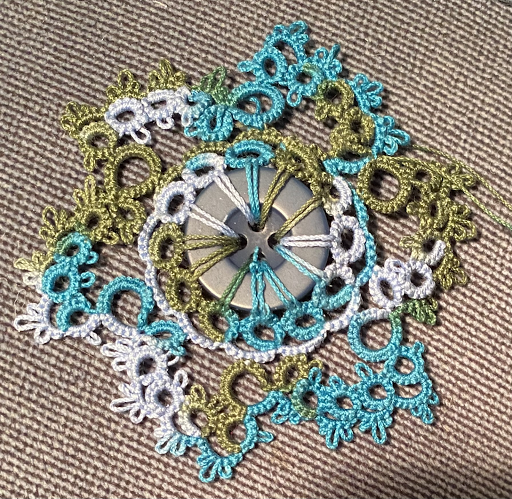 This is adapted from the book, "Tatted Treasures" by a gentleman named Jan Stawasz.  It's the main motif from his Waistcoat pattern found in that book.  I have a thing for spirals and had a really fun time with this one.  It worked up surprisingly quickly.  As this was never my pattern to start with, I have not added a watermark to it.

One last piece, and I'm sure this one will resonate with many people: 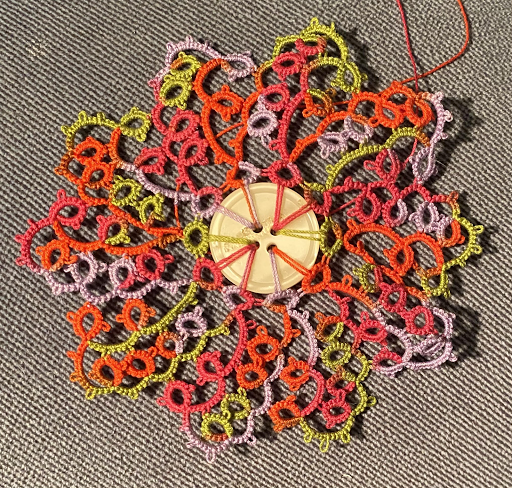 This one is based on Mary Konior's Spinning Wheel Glass Mat from her book, "Tatting with Visual Patterns".  I'm so sorry, but the photo isn't of a blocked ornament.  I'm afraid the dog got a bit anxious and this got the tooth treatment.  There's not a lot left of it.

Anyway, the arms are shortened by a ring or two, but beyond that there aren't that many changes needed.

So many of us look at others' works and say "oh, I wish I could do that" or "I'll never be able to do that".  We set ourselves up to fail, and it's so sad.

Perhaps, the next time you admire something and would love to make it your own, don't listen to the little voice telling you that you can't.  Did I waste thread?  Yes, I most certainly did.  Did I get frustrated? Put it this way, we were getting close to a projectile tatting moment at many points along the way!  Did I have to start over again?  Oh, yes!

Tatting Guilds and Groups in Canada

Sources for Supplies in Canada

How Many Folks Have Visited?