Hello Lovely Tatters, and I hope you’re all enjoying the winter that almost never was! Here on the bald, flat Canadian prairie we’ve had next to no snow, above-freezing temperatures, a Christmas that was mostly green, weeks where we actually had rain, it was a very different season overall. This week we finally got seasonal temperatures. Winter is almost over, so it’s about time winter showed up. Just in time for Spring!

Since I’ve been stuck in the house, literally, with the cold my brain has done the customary wandering that comes with boredom. I recently looked on any artist’s nemesis, Pinterest, as I do get inspiration and ideas from there. I was shocked and more than a little angry to fine MY design proudly displayed on a Pinterest page that I had never heard of, without any credit given to it being my design!

Pinterest is banned from being mentioned in many groups for one reason:  copyright infringement. Now, many can’t understand why it’s such a big deal if you “copytat” a pattern you find (look at a photo and recreate the item by counting stitches), post something created from the pattern of another and claim the work as your own, take an idea you heard from another source and incorporate it into your own work without crediting the source, all kinds of things. It’s complicated and not without pitfalls.
I saw a post by Cynthia Stevenson in a Facebook group called “Beginning Tatting Helpers”. In her post, she presented a flowchart that I felt hit the nail on the head. 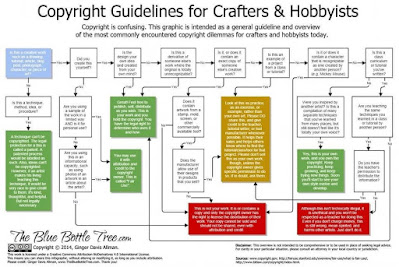 This flowchart explores the various different scenarios that arise from making and sharing designs and patterns, and the ethical questions of whether you should in the first place. It was originally presented in 2014 by a crafter named Ginger Davis Allman, and is intended as a guideline so you can decide for yourself if you should continue on a selected course of action. One of the disclaimers at the bottom does indicate that you should seek legal advice, which is especially true if you’re thinking of publishing a book professionally. You should be seeking advice in that event for your own protection and so you have solid recourse if you are the the one victimized by copyright infringement.
Let’s take an example: A tatter has spent 5 years creating patterns, drawing them out, writing directions, editing photos, rewriting the directions, sourcing and communicating with testers, paying no small fortune to have their book published so everyone can benefit from this crowning achievement. The book sells well, people praise the work, there are examples of the different projects made from the book shared in so any places, the book is a huge success. Life is good for our tatter.
Until...
One day, the tatter goes into one of the groups they frequent and sees a blatant advertisement of THEIR book for sale at a questionable website for 1/3 the book's original list price. The tatter heads over to this website only to find out that their book has been purchased, ripped apart, scanned cheaply and is being sold as a .PDF. The book then finds its’ way to a “free” website where every Tom, Dick and Harry can download a copy for free, without any financial credit to the author. The tatter’s ideas, hard work and financial outlay to share this book have been stolen for someone else’s benefit!
Mine was just a motif, an ice drop that I did share freely. What was irksome is that this “person” rewrote my directions, left my name completely off their copy and made it out to be theirs. I dealt with it and reported them to Pinterest, but I wasn’t happy. Why would anyone steal something  that was free in the first place and shared without any strings except you credit the designer? I certainly wouldn't appreciate someone coming into my house and stealing my stuff.  My intellectual property is no different.
If you do this and the the designer catches you, then you run the risk of being publicly called out, which is never fun. I have seen copyright thieves banned from Facebook groups, not allowed to attend conventions, just shunned in general. It’s nasty and it’s embarrassing to be “that tatter”.
If you're wanting to look at things, that's great.  There's nothing wrong with browsing.  If you get an idea from someone online, give them the credit for inspiring what you created.  If you've made something from a book written by someone else, please credit them with the creation of that pattern!  A lot of that person's creative heart has gone into the creation of that idea.  Don't stab them in it to make yourself happy.  It's copyright infringement that's holding back a great many talented people from sharing their creative talents and inspiring the next generations of tatters.
On that note, I'm going to make a cup of something hot so I can try to warm myself up.  It's blessed cold outside!
Happy Tatting!
Posted by Prairie Lace Tatter at February 07, 2021

Tatting Guilds and Groups in Canada

Sources for Supplies in Canada

How Many Folks Have Visited?